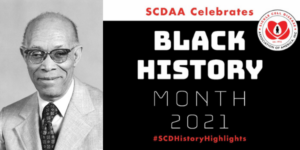 For our final #SCDHistoryHighlight of Black History month, we are excited to reflect on the life and work of Dr. Roland Scott. Dr. Scott has been celebrated as the “father of sickle cell disease” in the United States, and completed groundbreaking research as he advocated for his patients during a time of intense discrimination.
Dr. Scott was born in 1909 and graduated with his medical degree from Howard University in 1934. He spent the majority of his career in the pediatrics department of Howard University. During this time, he began to notice the high number of African American children in the emergency room experiencing sickle cell symptoms and complications. Dr. Scott was a trained allergist, but he switched his focus to help improve treatment for this misunderstood disease. A compassionate pediatrician, Dr. Scott held office hours in the evenings during which he would see African American children and families who were discriminated against and denied access to medical treatment.
Dr. Scott would go on to publish hundreds of articles on sickle cell disease during his time at Howard University. Although he did not specialize in hematology, in 1948 Dr. Scott published a paper on the sickling of red blood cells in newborns. This paper paved the way to a better understanding of sickle cell disease and laid the groundwork for newborn screening as we know it today.
In addition to being a dedicated researcher, Dr. Scott was a fierce advocate for sickle cell disease. His advocacy played a large role in the federal government’s passing of the Sickle Cell Anemia Control Act of 1971, which ensured nationwide funding for the research and treatment of sickle cell disease. In 1972, Dr. Scott founded the Howard University Center for Sickle Cell Disease, which continues to conduct research and provide care to sickle cell patients today. Dr. Scott’s work and advocacy changed the landscape for sickle cell disease, and we owe so much of our capability to treat and understand sickle cell to his efforts.