In Memory of Dr. Kwaku Ohene-Frempong 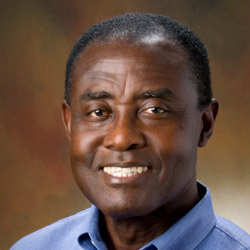 We are devastated to learn of the death of Dr. Kwaku Ohene-Frempong on Saturday, May 7, 2022. Dr. Ohene-Frempong was a true leader in the sickle cell community and dedicated his life and career to working with SCD. He held many roles on the Sickle Cell Disease Association of America board of directors over the years, including chief medical officer, board chair and board member emeritus. He also sat on the SCDAA Medical and Research Advisory Committee. His presence will be sorely missed in our organization and in the community at large.

Dr. Ohene-Frempong was born in Ghana, and his record of excellence as a student-athlete earned him a scholarship to Yale to study pre-med and later, a trip to the Olympics representing Ghana in track and field. He received his medical degree from the Yale School of Medicine in 1975. While finishing his degree, his son became the first baby diagnosed with sickle cell disease by Dr. Howard Pearson in the pioneering newborn screening program at Yale in 1972. His firsthand experience with sickle cell and newborn testing motivated him to dedicate his life and career to studying and advocating for sickle cell.

In the United States and all over the world, Dr. Ohene-Frempong was a leading pediatric sickle cell physician. He was director emeritus of the Comprehensive Sickle Cell Center at The Children’s Hospital of Philadelphia, emeritus professor of Pediatrics at the Perelman School of Medicine at the University of Pennsylvania and president of the Sickle Cell Foundation of Ghana.

His landmark analysis of stroke in the Cooperative Study of Sickle Cell Disease showed the high rates of stroke in children from blocked blood flow and high rates of stroke in adults that were from bleeding aneurysms. He also pioneered a newborn screening and follow-up program in Kumasi, Ghana, where one in 50 babies have sickle cell disease. It has been a beacon and training center for sickle cell care and research in Africa. Dr. Ohene-Frempong founded the Sickle Cell Foundation of Ghana and was a founding member of the Global Sickle Cell Disease Network.

To learn more about Dr. Ohene-Frempong’s outstanding life, we encourage you to listen to this podcast episode about his story.

We will greatly miss Dr. Ohene-Frempong’s dedication, passion and intelligence. We will share more information about services as they are announced. Our sincerest condolences go out to his friends and family.